Cycle Scouts - The First of its kind in the United States

The first Cycle Boy Scout patrol in the United States was organized by J.W. Griffin in Oakland, California in October of 1910.  Griffin was formerly a member of the Cycle Corps in the English Army in the Boer War.  Griffin took an interest in the fledgling Boy Scout movement which began in the Bay Area in 1910.  Griffin indicated that the Cycle Scouts would be composed entirely of cycle riders.

The organization of the first Cycle Corps of the Boy Scouts of America in Oakland is by special arrangements with the national and local leaders of the Boy Scout movement. The cycle scouts are already being signed up at the Oakland City Hall by the Superintendent of Oakland Playgrounds George Dickie, who indicated “it wont be long before the full patrol is given its commission and charter”.

Several patrols of Boy Scouts have already been organized in Oakland and the annexed district, but these are wholly on the plan of the Scout patrols In San Francisco and other cities of the East Coast.  No corps of bicycle Boy Scouts currently exists in the United States, Oakland being the first to plan such an organization.

The Cycle corps will be organized in accordance with the regulations laid down by General Baden-Powell and will be modeled on the British Boy Scout Cycle Corps.  The drill is essentially similar to the mounted drill in both the English and American armies and has many points which make it attractive to boys.

The Oakland committee selected J. W. Griffin, a veteran of the Boer war, who served as company quartermaster sergeant and was a member of the Army cycle corps to head the local patrol and teach the boys the drill.  He is now signing up the boys for the corps and making arrangements for uniforms and equipping the organization

it is planned by Griffin and Dickie that if the Cycle Corps is organized soon enough, short trips will b e taken and encampments made in the hills back of Oakland.

Requirements for enlisting in the Cycle Patrol of the Boy Scouts are as follows:

The boy must be a resident of Oakland.

First Troop of Cycle Scouts in the Country, Organized in Oakland, CA.  October 1910 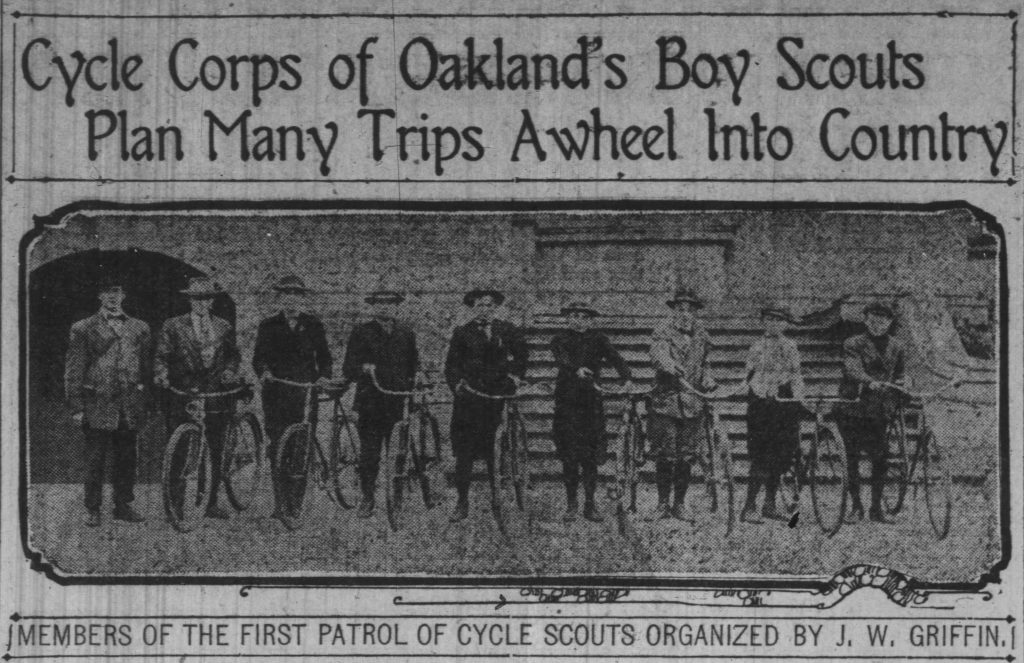